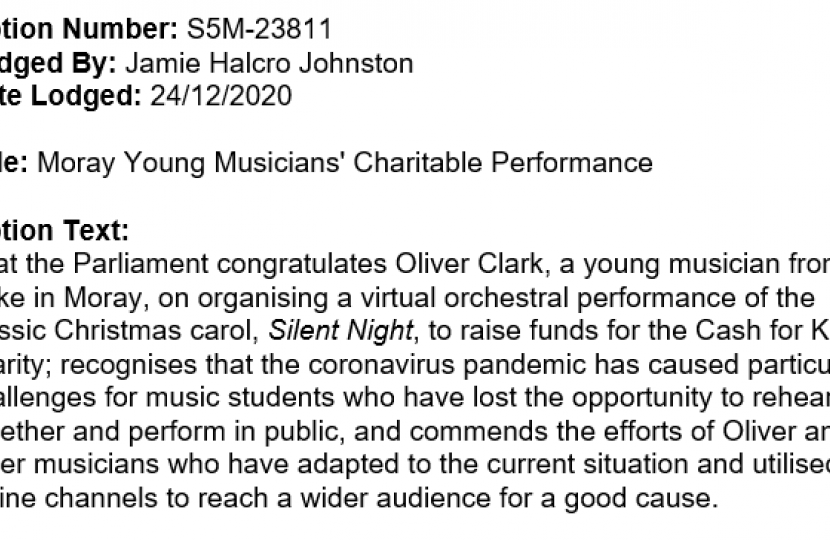 A virtual orchestral performance of the classic Christmas carol Silent Night organised by a young Moray music student has won praise at the Scottish Parliament.

22 year old Oliver Clark, from Dyke in Moray, tutored a number of young musicians from the North of Scotland in order to record the carol which has been uploaded onto YouTube and has raised funds for the charity Cash for Kids.

Highlands and Islands MSP Jamie Halcro Johnston, who submitted the motion praising Oliver’s efforts said: “It is heartening indeed, especially in the run up to Christmas, to see young local people using their skills in such a positive way.

“I know that Oliver did a power of work, including the online tutoring of some of the young musicians, in order to get them to be able to perform at this level.

“The pandemic has been a particular challenge for music students as rehearsing and performing together is usually a staple part of their education, so it is encouraging to see how this example of an imaginative use of technology has allowed a number of students to collaborate and produce a recording of this quality.

“I know that Oliver would wish to highlight the fantastic grounding he was given by his music teachers at school and at the Moray Music Centre.

“That has given him the opportunity to pursue a career in music and I very much hope that Moray Council will be able to continue to support music education in the future.”

The performance of Silent Night can be accessed here: https://www.youtube.com/watch?v=LDtlQ7o4tbM