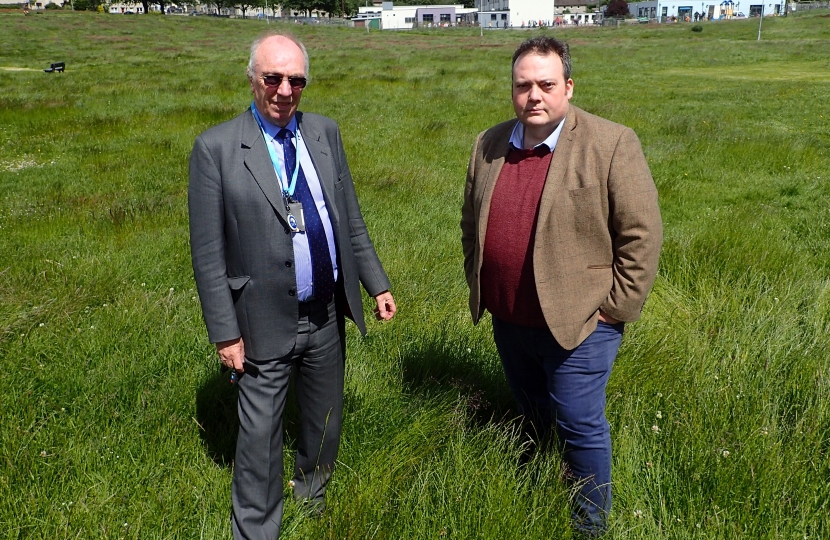 Highlands and Islands MSP Jamie Halcro Johnston has said he is disappointed by Moray Council’s response to his letter to them on grass-cutting in the county.

On behalf of local residents who had raised concerns with him since services had been withdrawn, the Scottish Conservative MSP had called on the Council to review its policy of grass-cutting in public places.

However, in an emailed reply, Moray Council dismissed his plea, arguing grass-cutting was not a statutory requirement and that they had no responsibility over ticks.

The Scottish Conservative MSP said: “I wrote to Moray Council asking them, in the light of problems caused by the implementation of the grass-cutting policy, to review how they carry it out in practice.

“I share the concern of residents in Bishopmill that the very large area of uncut grass by Brodie Drive is having an unduly negative impact on the local community who have lost a very important amenity.

“Like them I am also worried that we may see a big problem with ticks and the possible transmission of Lyme Disease due to the lack of cutting allowing ticks to spread into the long grass.

“I was therefore astonished when the Council responded by saying that the control of ticks is not their responsibility, even though it is their actions – or rather lack of action – which could cause them to spread.

“It was a remarkably dismissive response which just brushes off the concerns I’m raising on behalf of local communities in Moray.

“The administration can’t just wash their hands of this issue”.

Mr Halcro Johnston said he was disappointed with SNP Council Leader Graham Leadbitter for dismissing out of hand his request for a review  before he received the formal response from the Council.

“I found it deeply disappointing that Councillor Leadbitter and the local SNP decided to turn this into a political issue by attacking me and other local Conservative representatives for bringing this issue to public attention.

“His thoughtless response now makes it very difficult for a more responsible approach to be taken as it would require him and his SNP colleagues to eat a very large slice of humble pie.”

Also expressing their frustration with the Council response were the two Conservative councillors for Elgin City North, Frank Brown and Maria McLean.

Councillor Brown said: “ We all know that Moray Council has to cut its cloth due to the unfair treatment it receives from the Scottish Government and that means making savings in areas like grass-cutting.

“But the way the policy is implemented can be modified in the light of experience and it is mystifying why we are getting a point-blank refusal to even look at it again.”

Councillor McLean said: “Many of the people who live in and around Brodie Drive are elderly or are families with small children who find it difficult to get to other open areas out of town.

“The loss of the park area is felt very deeply and I have been contacted by many local people who have expressed their upset to me.

“The administration councillors need to remember that they are there to serve the people. It surely must be possible to get a cut made before the grass gets even longer.”